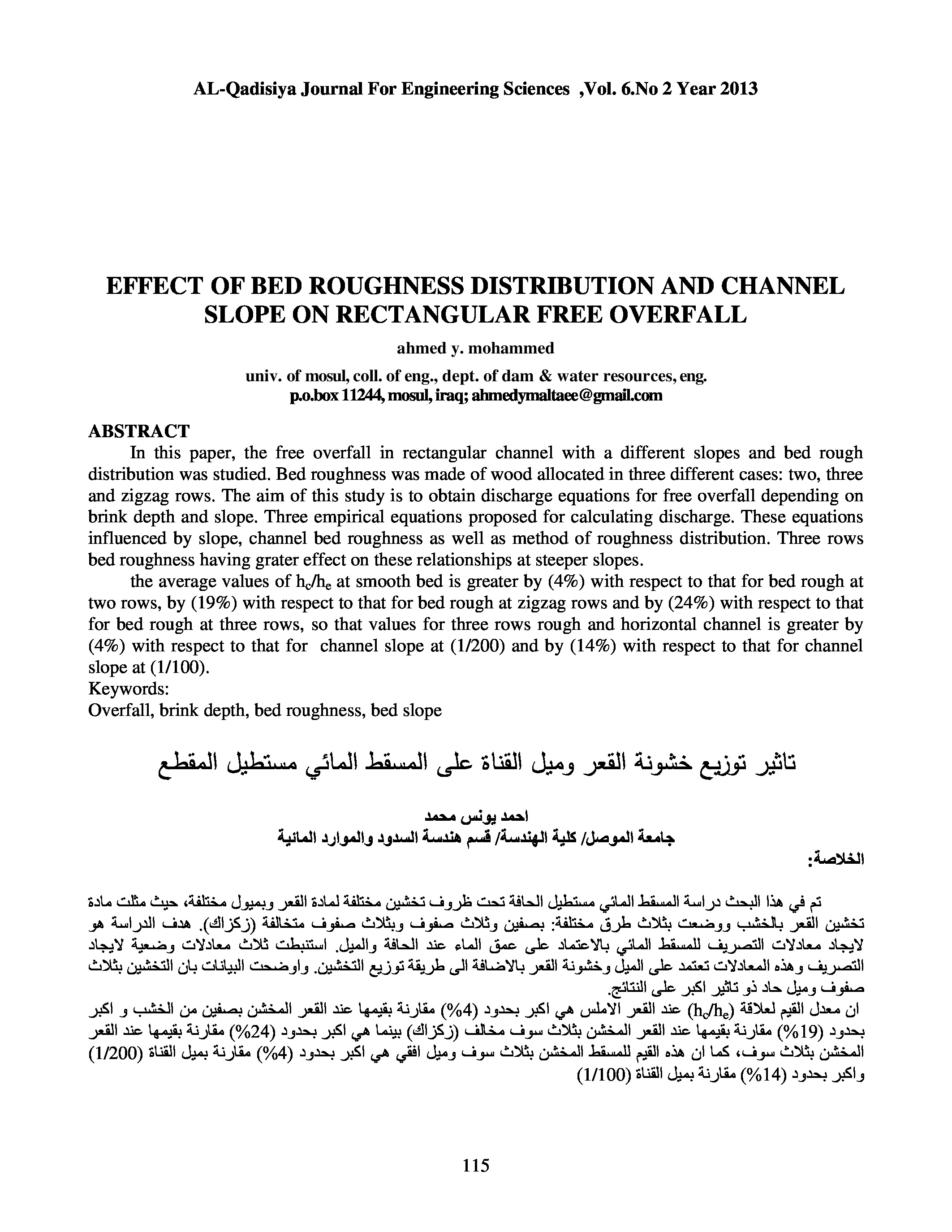 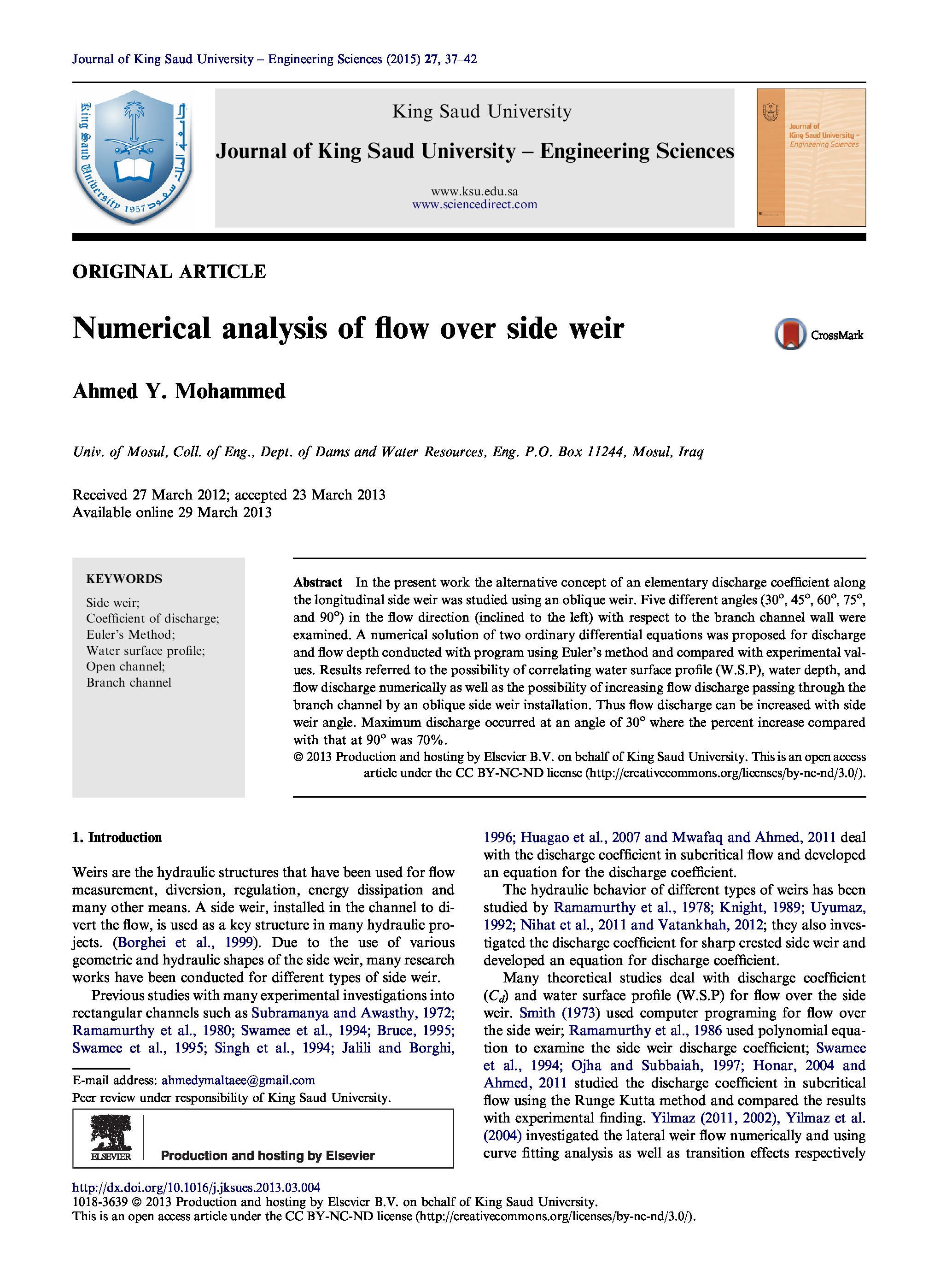 Numerical analysis of flow over side weir
Engineering (Civil engineering)

Ahmed Y Mohammed
Date of upload:
10.12.2018
Co-author:
Abstract:
In the present work the alternative concept of an elementary discharge coefficient along the longitudinal side weir was studied using an oblique weir. Five different angles (30o, 45o, 60o, 75o, and 90o) in the flow direction (inclined to the left) with respect to the branch channel wall were examined. A numerical solution of two ordinary differential equations was proposed for discharge and flow depth conducted with program using Euler’s method and compared with experimental values. Results referred to the possibility of correlating water surface profile (W.S.P), water depth, and flow discharge numerically as well as the possibility of increasing flow discharge passing through the branch channel by an oblique side weir installation. Thus flow discharge can be increased with side weir angle. Maximum discharge occurred at an angle of 30o where the percent increase compared with that at 90o was 70%.
View more 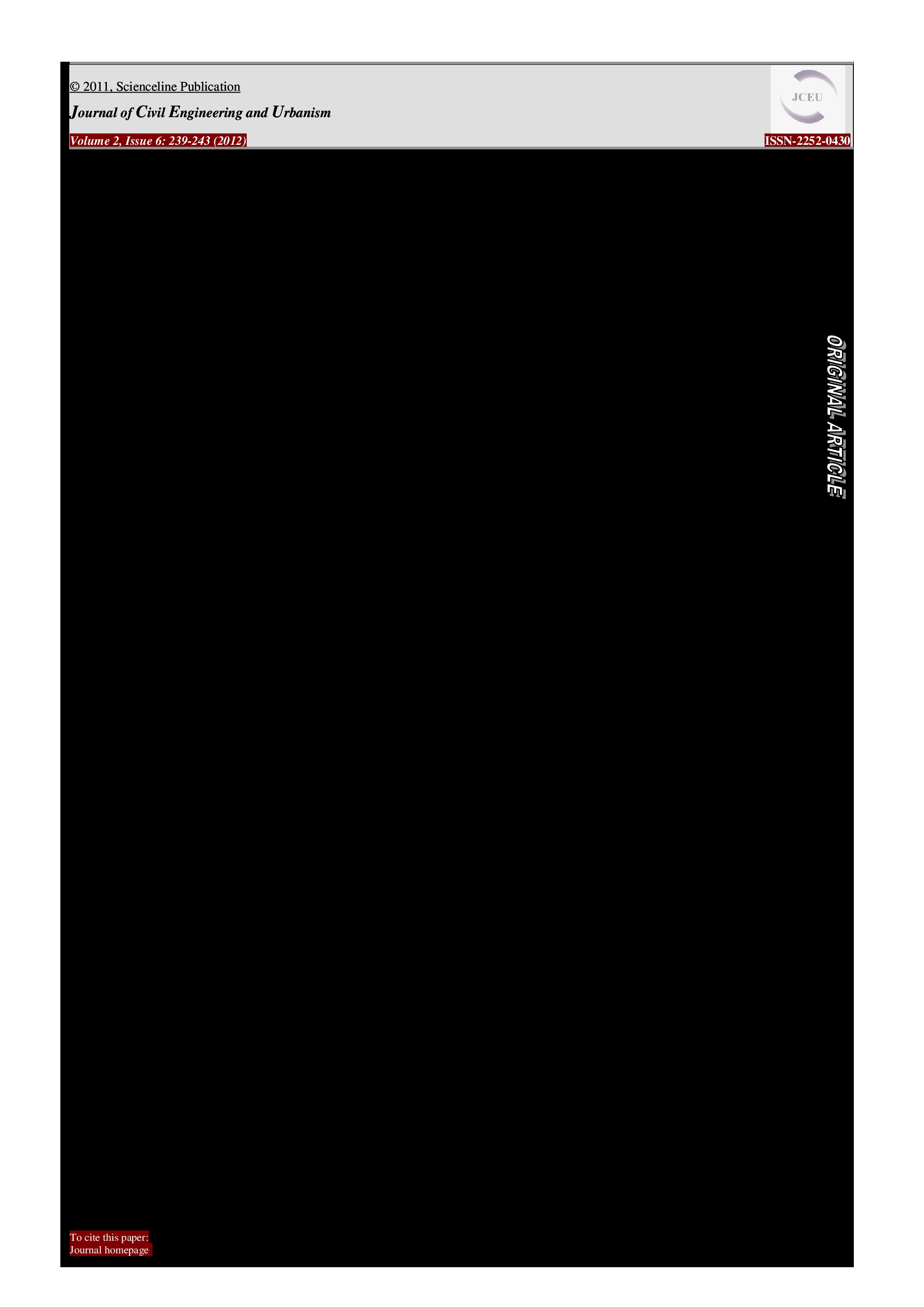 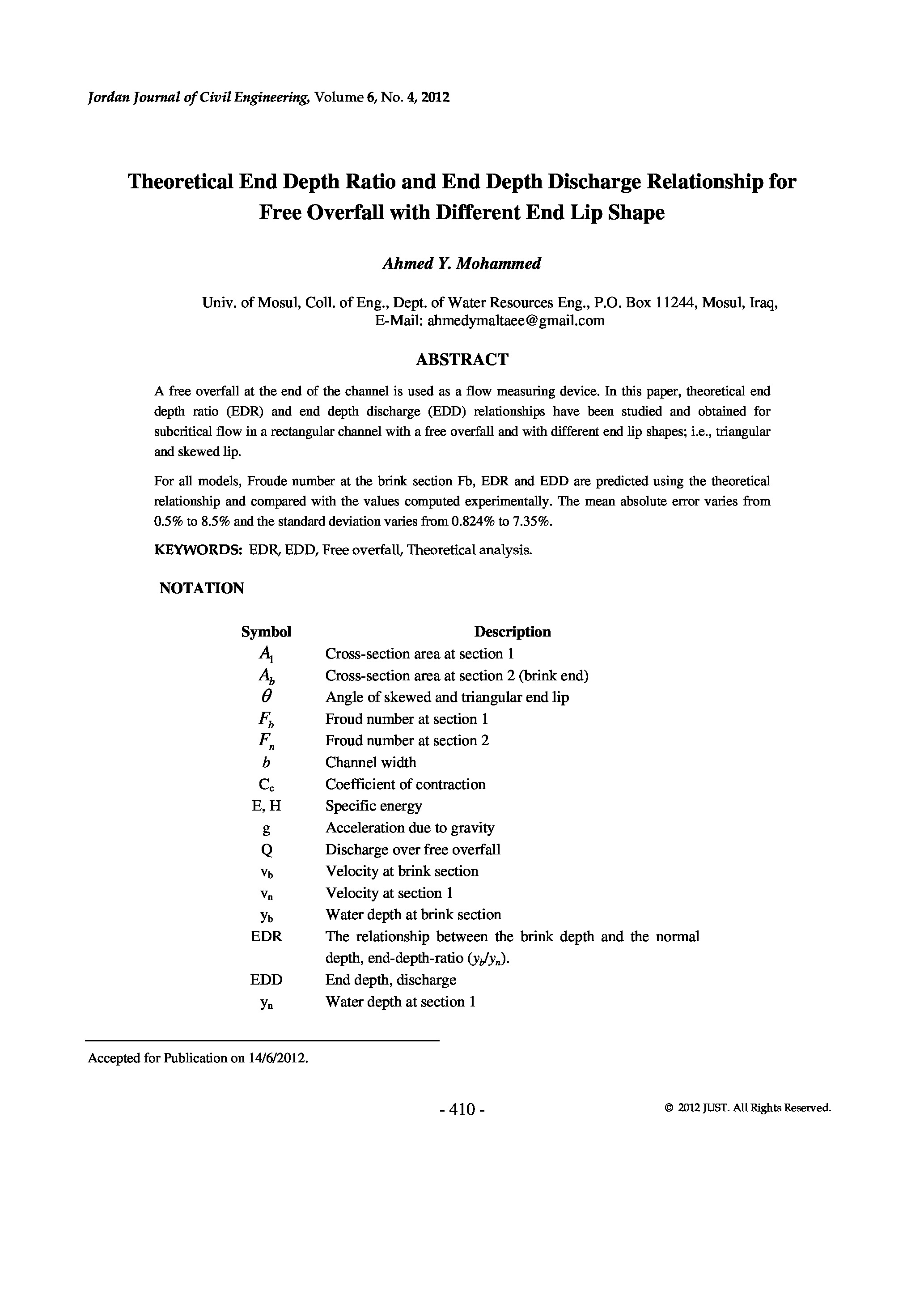 Ahmed Y Mohammed
Date of upload:
10.12.2018
Co-author:
Abstract:
A free overfall at the end of the channel is used as a flow measuring device. In this paper, theoretical end depth ratio (EDR) and end depth discharge (EDD) relationships have been studied and obtained for subcritical flow in a rectangular channel with a free overfall and with different end lip shapes; i.e., triangular and skewed lip. For all models, Froude number at the brink section Fb, EDR and EDD are predicted using the theoretical relationship and compared with the values computed experimentally. The mean absolute error varies from 0.5% to 8.5% and the standard deviation varies from 0.824% to 7.35%.
View more 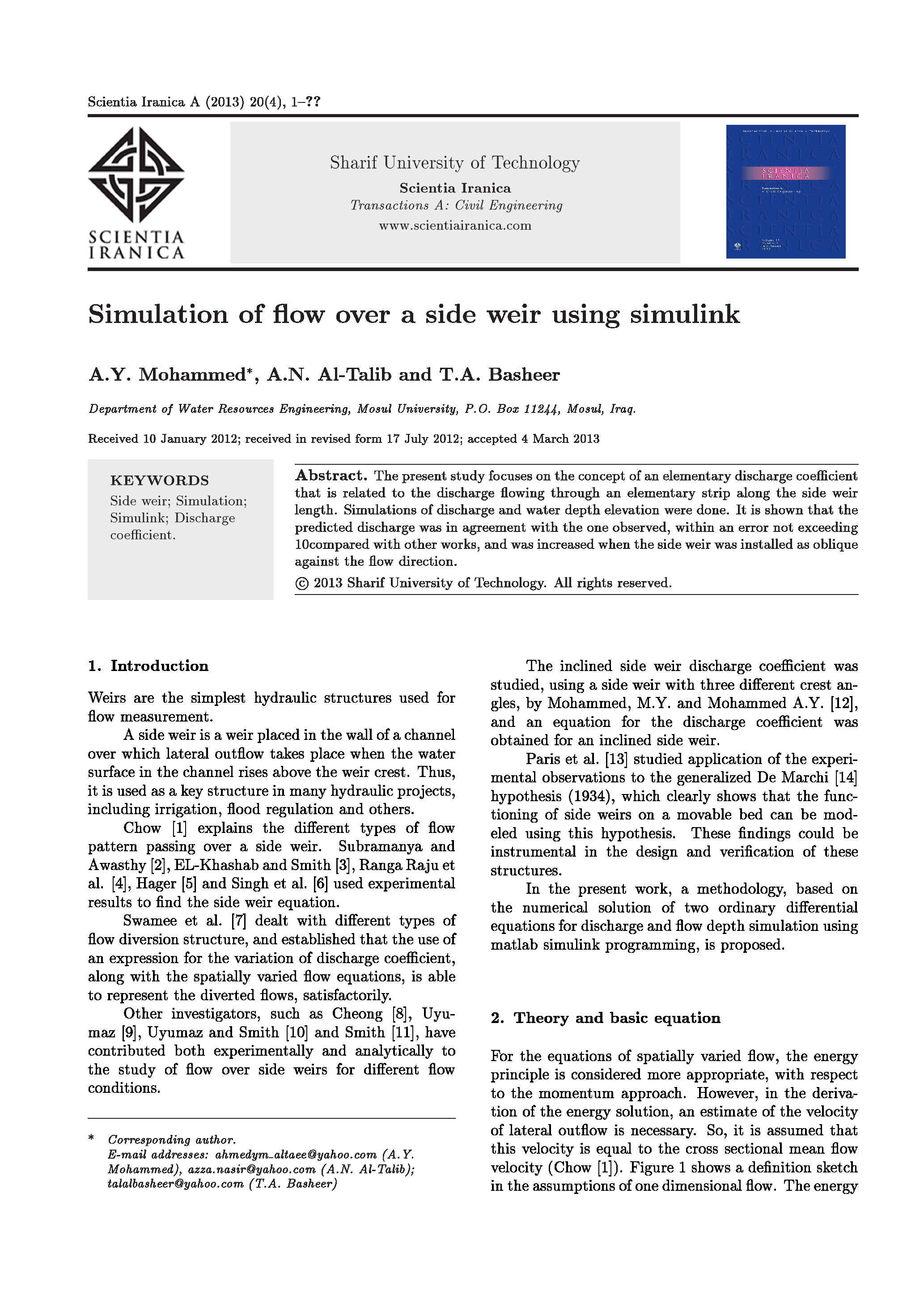 Ahmed Y Mohammed
Date of upload:
10.12.2018
Co-author:
Abstract:
The present study focuses on the concept of an elementary discharge coecient that is related to the discharge owing through an elementary strip along the side weir length. Simulations of discharge and water depth elevation were done. It is shown that the predicted discharge was in agreement with the one observed, within an error not exceeding 10compared with other works, and was increased when the side weir was installed as oblique against the ow direction
View more 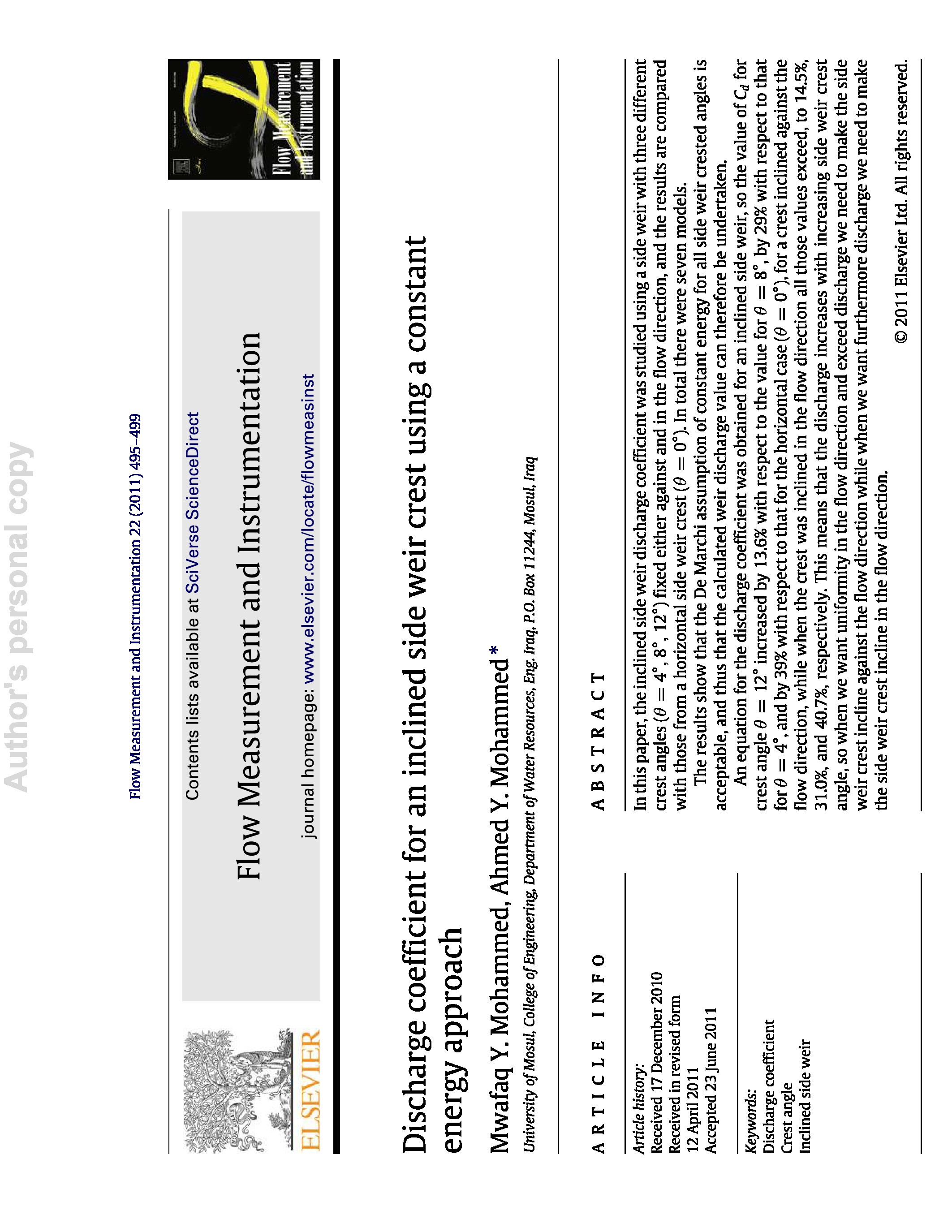 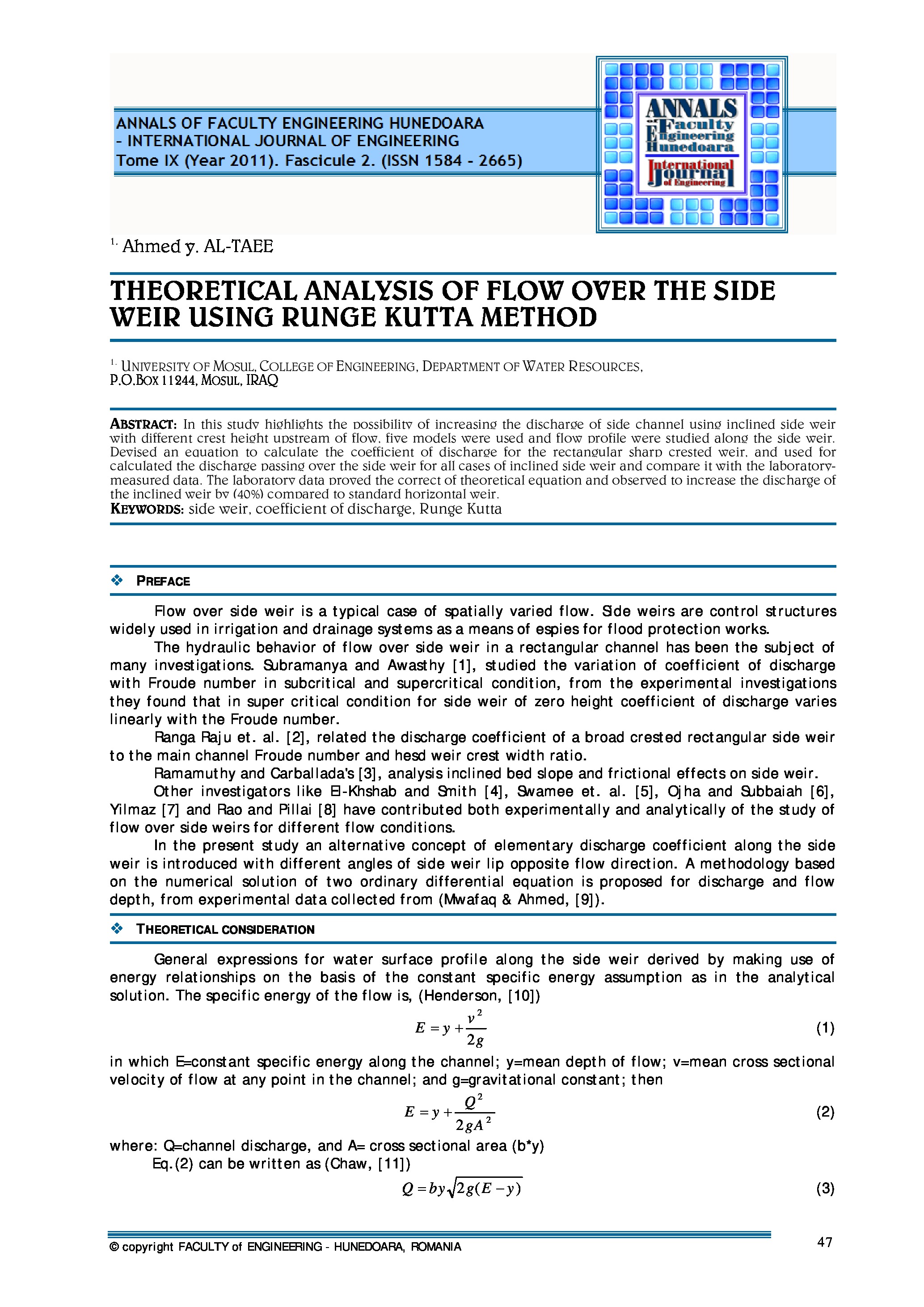 Ahmed Y Mohammed
Date of upload:
10.12.2018
Co-author:
Abstract:
In this study highlights the possibility of increasing the discharge of side channel using inclined side weir with different crest height upstream of flow, five models were used and flow profile were studied along the side weir. Devised an equation to calculate the coefficient of discharge for the rectangular sharp crested weir, and used for calculated the discharge passing over the side weir for all cases of inclined side weir and compare it with the laboratorymeasured data. The laboratory data proved the correct of theoretical equation and observed to increase the discharge of the inclined weir by (40%) compared to standard horizontal weir.
View more
Sort
View
Max
Min
End date
Youngest
Oldest
Alphabetical
A-Z
Z-A