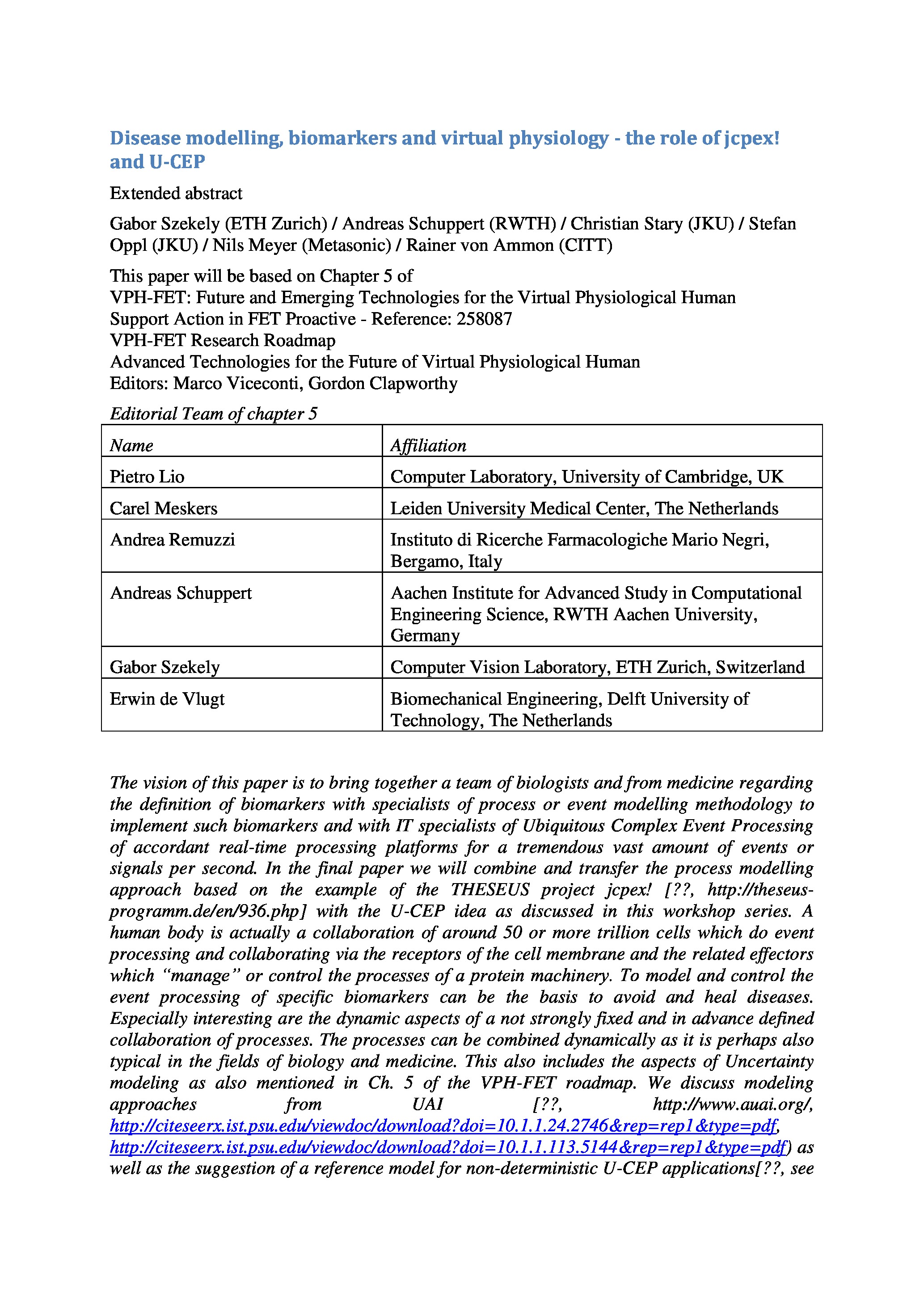 Rainer von Ammon
Date of upload:
31.10.2015
Co-author:
Gabor Szekely (ETH Zurich), Andreas Schuppert (RWTH), Christian Stary (JKU), Stefan Oppl (JKU), Nils Meyer (Metasonic)
Abstract:
The vision of this paper is to bring together a team of biologists and from medicine regarding the definition of biomarkers with specialists of process or event modelling methodology to implement such biomarkers and with IT specialists of Ubiquitous Complex Event Processing of accordant real-time processing platforms for a tremendous vast amount of events or signals per second. In the final paper we will combine and transfer the process modelling approach based on the example of the THESEUS project jcpex! [??, http://theseusprogramm.de/en/936.php] with the U-CEP idea as discussed in this workshop series. A human body is actually a collaboration of around 50 or more trillion cells which do event processing and collaborating via the receptors of the cell membrane and the related effectors which “manage” or control the processes of a protein machinery. To model and control the event processing of specific biomarkers can be the basis to avoid and heal diseases. Especially interesting are the dynamic aspects of a not strongly fixed and in advance defined collaboration of processes. The processes can be combined dynamically as it is perhaps also typical in the fields of biology and medicine. This also includes the aspects of Uncertainty modeling as also mentioned in Ch. 5 of the VPH-FET roadmap.
View more 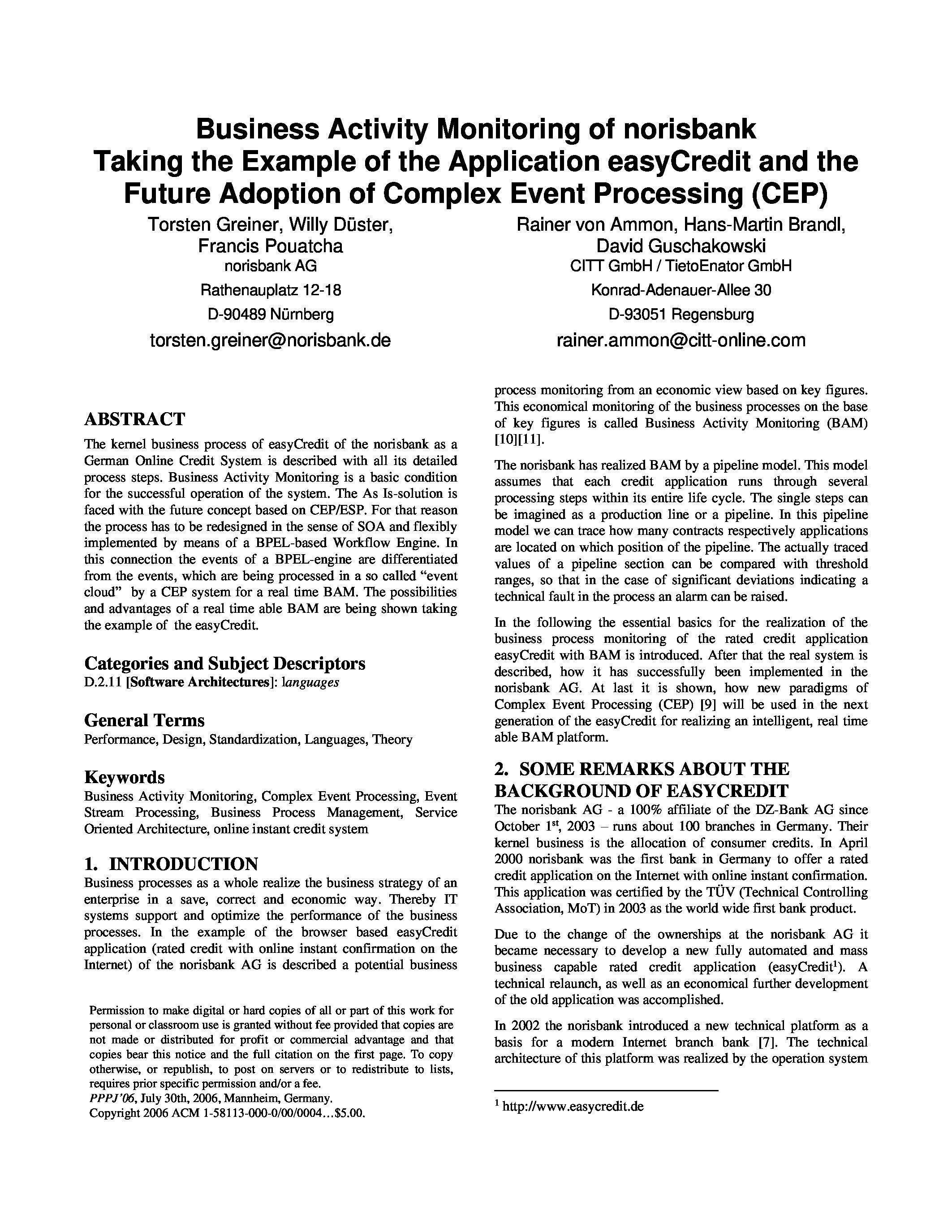 Rainer von Ammon
Date of upload:
30.10.2015
Co-author:
Torsten Greiner, Willy Düster, Francis Pouatcha, Hans-Martin Brandl, David Guschakowski
Abstract:
The kernel business process of easyCredit of the norisbank as a German Online Credit System is described with all its detailed process steps. Business Activity Monitoring is a basic condition for the successful operation of the system. The As Is-solution is faced with the future concept based on CEP/ESP. For that reason the process has to be redesigned in the sense of SOA and flexibly implemented by means of a BPEL-based Workflow Engine. In this connection the events of a BPEL-engine are differentiated from the events, which are being processed in a so called “event cloud” by a CEP system for a real time BAM. The possibilities and advantages of a real time able BAM are being shown taking the example of the easyCredit.
View more 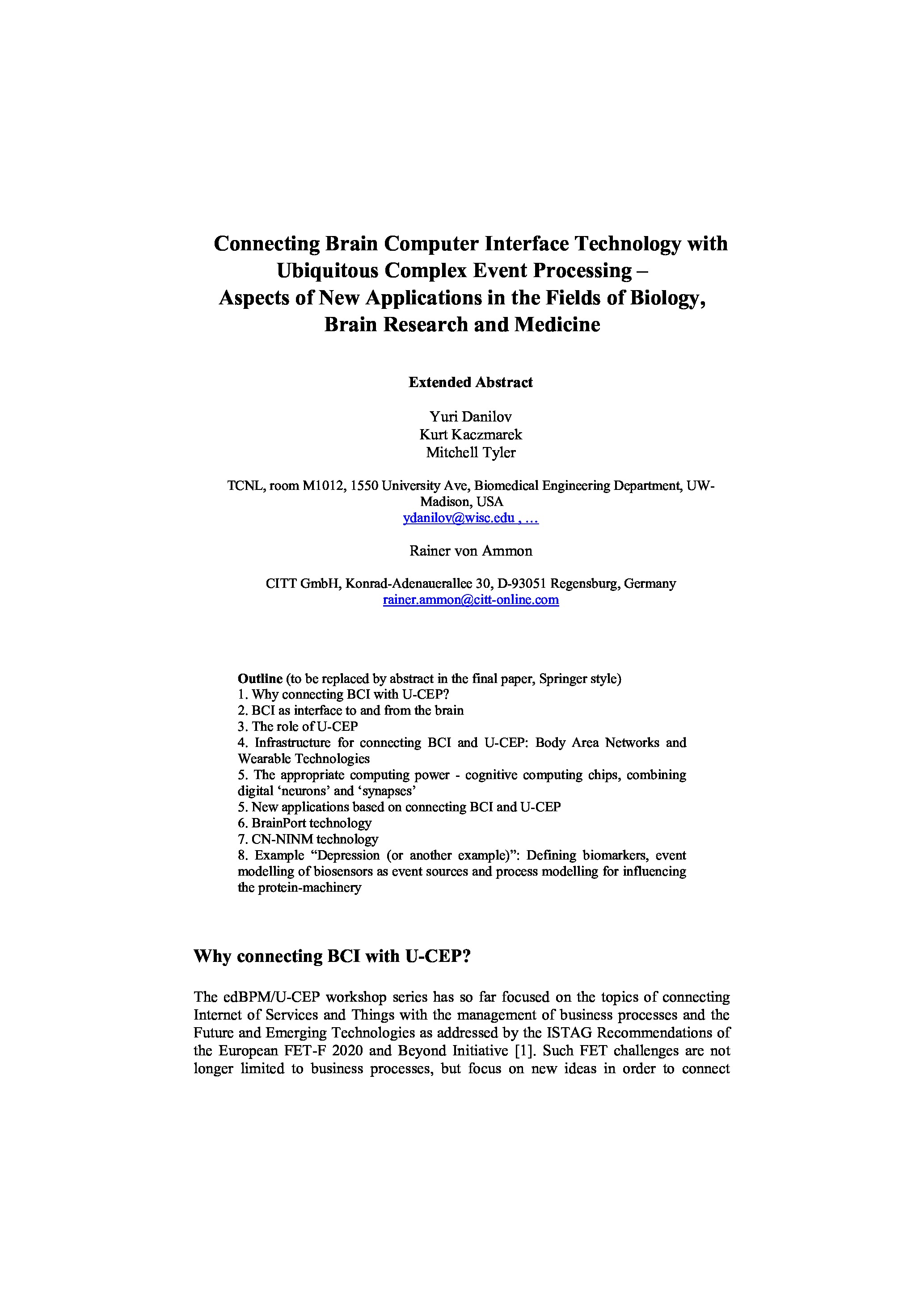 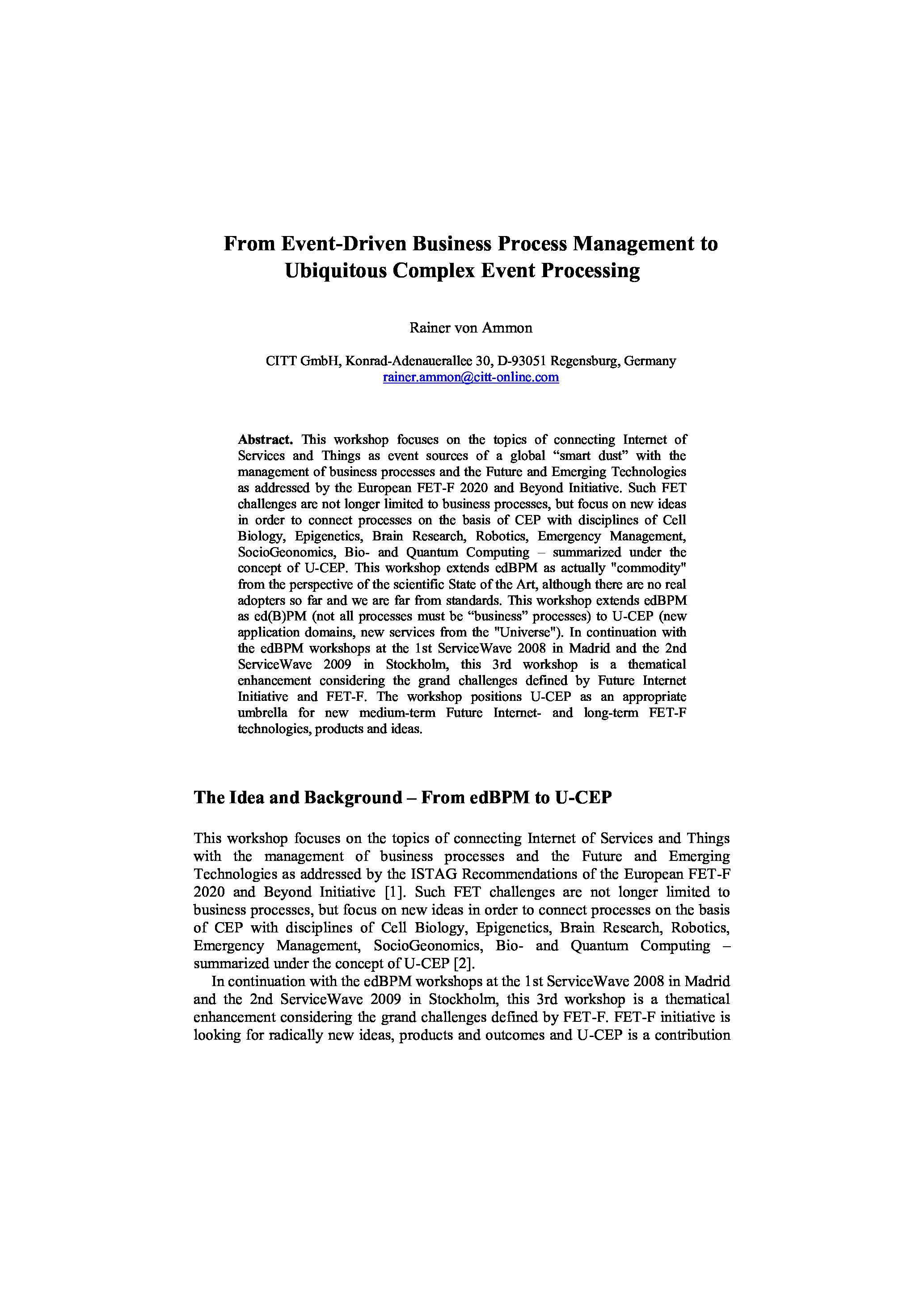 Rainer von Ammon
Date of upload:
29.10.2015
Co-author:
Abstract:
This workshop focuses on the topics of connecting Internet of Services and Things as event sources of a global “smart dust” with the management of business processes and the Future and Emerging Technologies as addressed by the European FET-F 2020 and Beyond Initiative. Such FET challenges are not longer limited to business processes, but focus on new ideas in order to connect processes on the basis of CEP with disciplines of Cell Biology, Epigenetics, Brain Research, Robotics, Emergency Management, SocioGeonomics, Bio- and Quantum Computing – summarized under the concept of U-CEP. This workshop extends edBPM as actually "commodity" from the perspective of the scientific State of the Art, although there are no real adopters so far and we are far from standards. This workshop extends edBPM as ed(B)PM (not all processes must be “business” processes) to U-CEP (new application domains, new services from the "Universe"). In continuation with the edBPM workshops at the 1st ServiceWave 2008 in Madrid and the 2nd ServiceWave 2009 in Stockholm, this 3rd workshop is a thematical enhancement considering the grand challenges defined by Future Internet Initiative and FET-F. The workshop positions U-CEP as an appropriate umbrella for new medium-term Future Internet- and long-term FET-F technologies, products and ideas.
View more 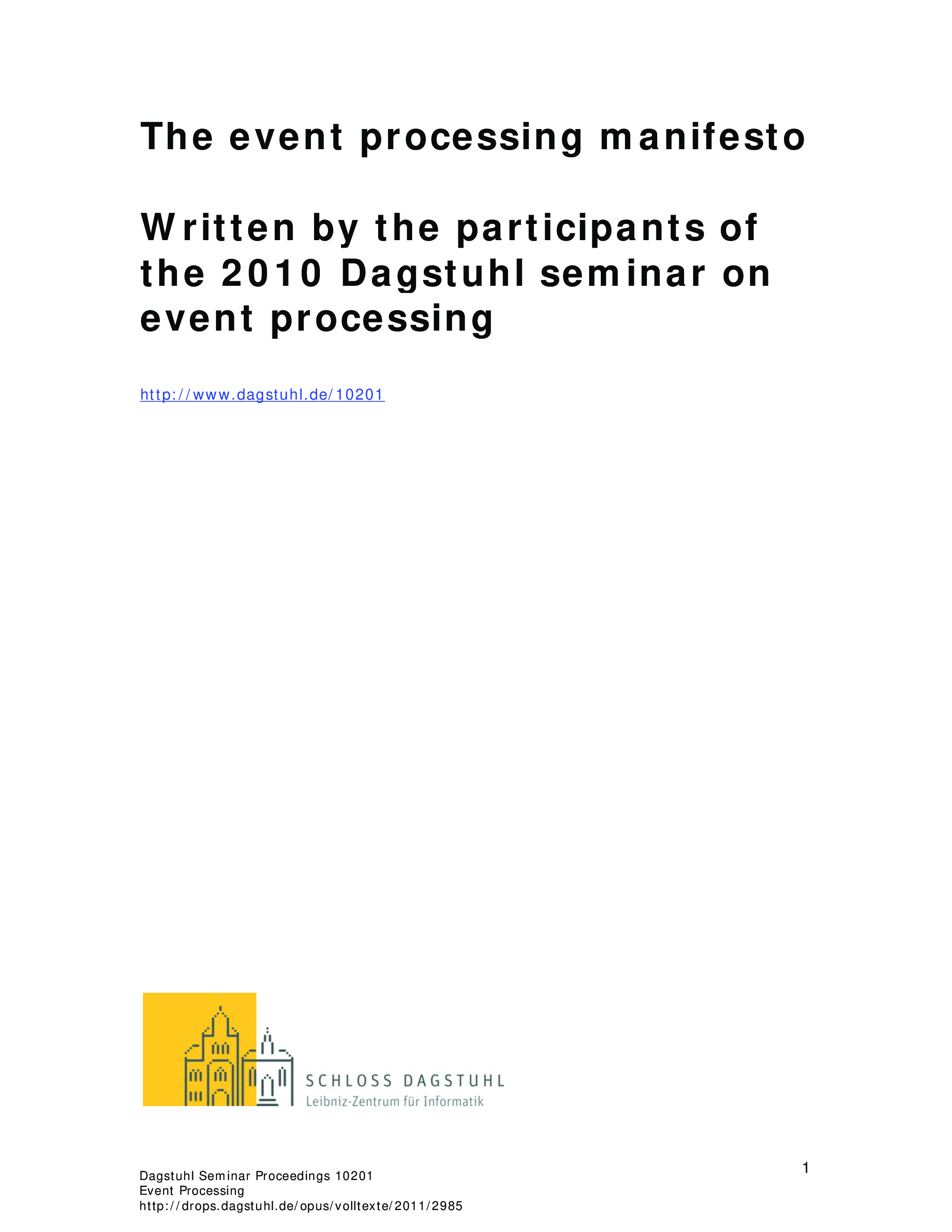 Rainer von Ammon
Date of upload:
29.10.2015
Co-author:
Abstract:
The second Dagstuhl seminar on event processing took place in May 2010. This fiveday meeting was oriented to work toward a comprehensive document that would explain event processing and how it relates to other technologies and suggest future work in terms of standards, challenges, and shorter-term research projects. The 45 participants came from academia and industry, some of them out of the event processing field. The teams continued the work after the conference and have summarized their findings in this document. The chapters were written by different teams and then edited for consistency. The chapter team leaders were: Robert Berry (Chapter 1), Peter Niblett (Chapter 2), Arno Jacobsen (Chapter 3), Paul Vincent (Chapter 4), Bernhard Seeger (Chapter 5), and Patrick Eugster (Chapter 6). The Dagstuhl seminar was organized by Rainer von Ammon, Mani Chandy, and Opher Etzion (who served as editor for this document); the technical editing was done by Sharon Geva. The following people participated in the seminar: Rainer von Ammon, Darko Anicic, Stefan Appel, Jean Bacon, Robert Berry, Pedro Bizarro, Andrey Brito, Simon Brodt, Francois Bry, Alejandro Buchmann, Sharma Chakravarthy, Badrish Chandramouli, Mani Chandy, Christoph Emmsersberger, Opher Etzion, Patrick Eugster, Dieter Gawlick, Annika Hinze, Martin Hirzel, Mark Horsburgh, Arno Jackobsen, Boris Koldehofe, Alexander Kozlenkov, Wolfgang May, Daniel Meiron, Ken Moody, Peter Niblett, Adrian Paschke, Udo Pletat, Olga Poppe, Tore Risch, Harold Shcoening, Roy Schulte, Bernhard Seeger, Marco Seirio, Guy Sharon, Plamen Siemonov, Florian Springer, Nenad Stojanovic, John SutcliffeBraithwate, Richard Tibbetts, Ronen Vaisnberg, Paul Vincent, Agnes Voisard, Christian Wolff, Carlo Zaniolo, and Holger Ziekow. All participants contributed to this document. This role of this document is twofold: To educate the public about event processing, since it is a relatively new area. To call for action to the community in the areas of standards and further research. One of the highlights of the seminar was the establishment of an event processing grand challenge. We believe that the current applications based on event processing technology just scratched the surface of its potential; the grand challenges offers a focus to make the quantum leap in the impact of event processing on the world.
View more 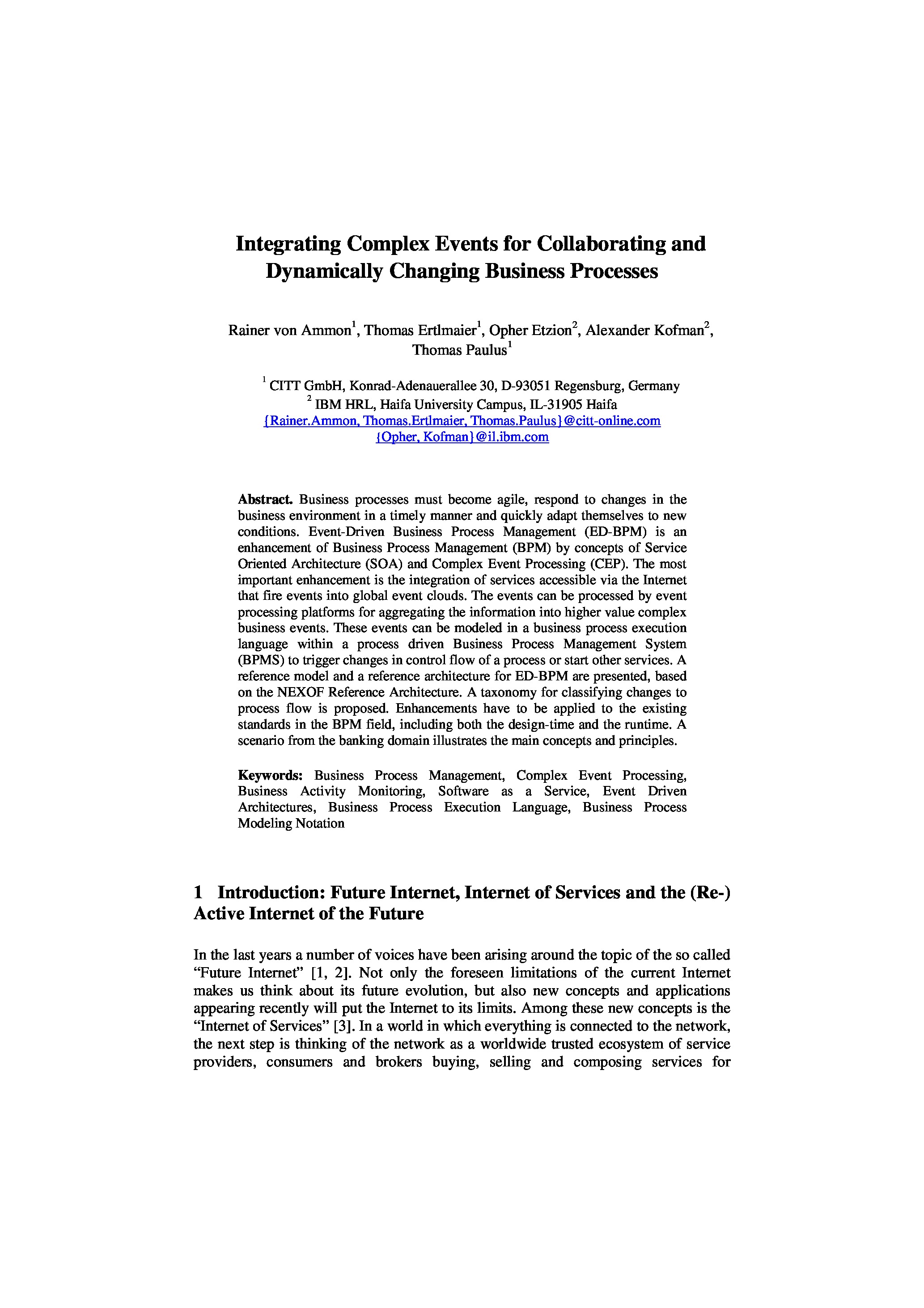 Rainer von Ammon
Date of upload:
29.10.2015
Co-author:
Thomas Ertlmaier , Opher Etzion , Alexander Kofman , Thomas Paulus
Abstract:
Business processes must become agile, respond to changes in the business environment in a timely manner and quickly adapt themselves to new conditions. Event-Driven Business Process Management (ED-BPM) is an enhancement of Business Process Management (BPM) by concepts of Service Oriented Architecture (SOA) and Complex Event Processing (CEP). The most important enhancement is the integration of services accessible via the Internet that fire events into global event clouds. The events can be processed by event processing platforms for aggregating the information into higher value complex business events. These events can be modeled in a business process execution language within a process driven Business Process Management System (BPMS) to trigger changes in control flow of a process or start other services. A reference model and a reference architecture for ED-BPM are presented, based on the NEXOF Reference Architecture. A taxonomy for classifying changes to process flow is proposed. Enhancements have to be applied to the existing standards in the BPM field, including both the design-time and the runtime. A scenario from the banking domain illustrates the main concepts and principles.
View more 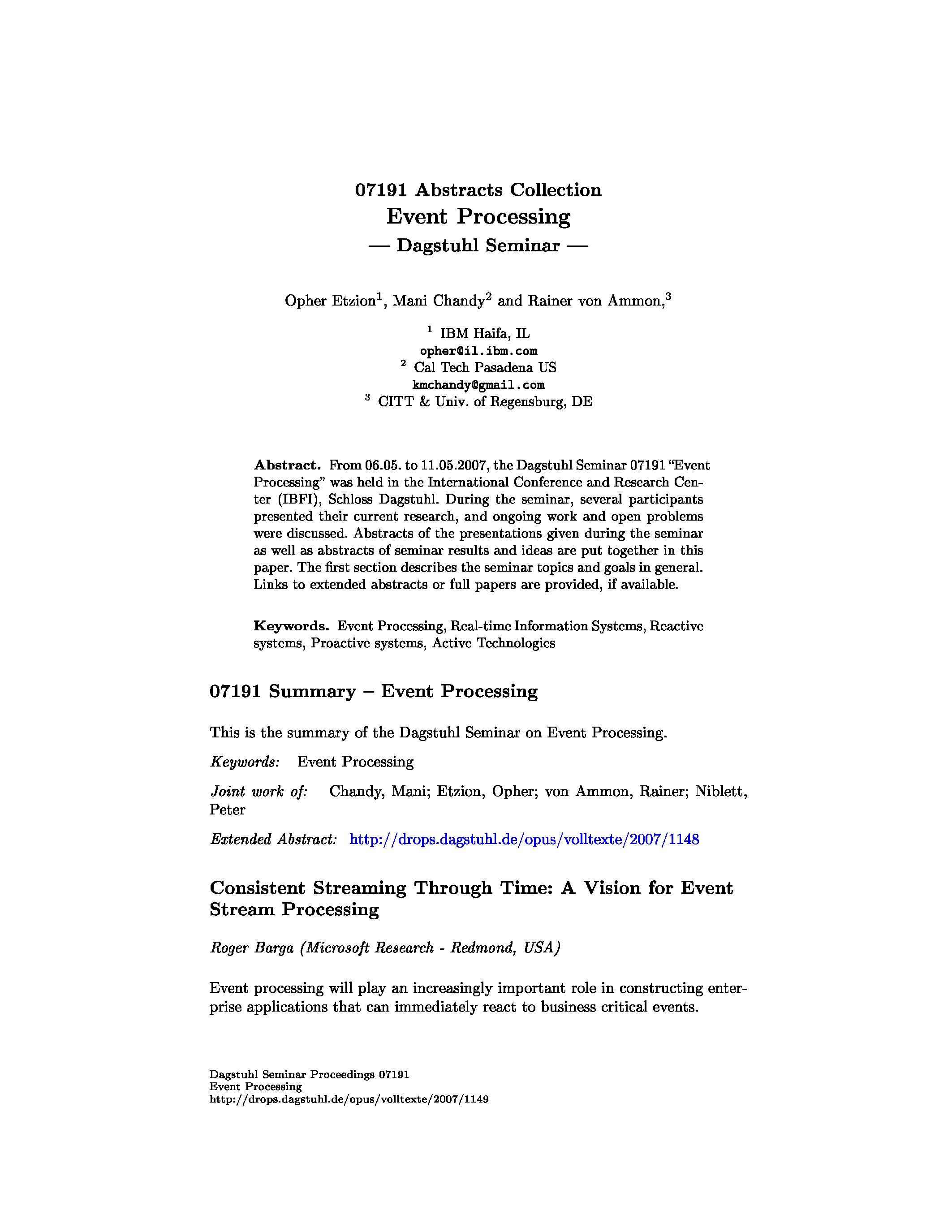 Rainer von Ammon
Date of upload:
30.10.2015
Co-author:
Opher Etzion, Mani Chandy
Abstract:
From 06.05. to 11.05.2007, the Dagstuhl Seminar 07191 Event Processing was held in the International Conference and Research Center (IBFI), Schloss Dagstuhl. During the seminar, several participants presented their current research, and ongoing work and open problems were discussed. Abstracts of the presentations given during the seminar as well as abstracts of seminar results and ideas are put together in this paper. The rst section describes the seminar topics and goals in general. Links to extended abstracts or full papers are provided, if available.
View more 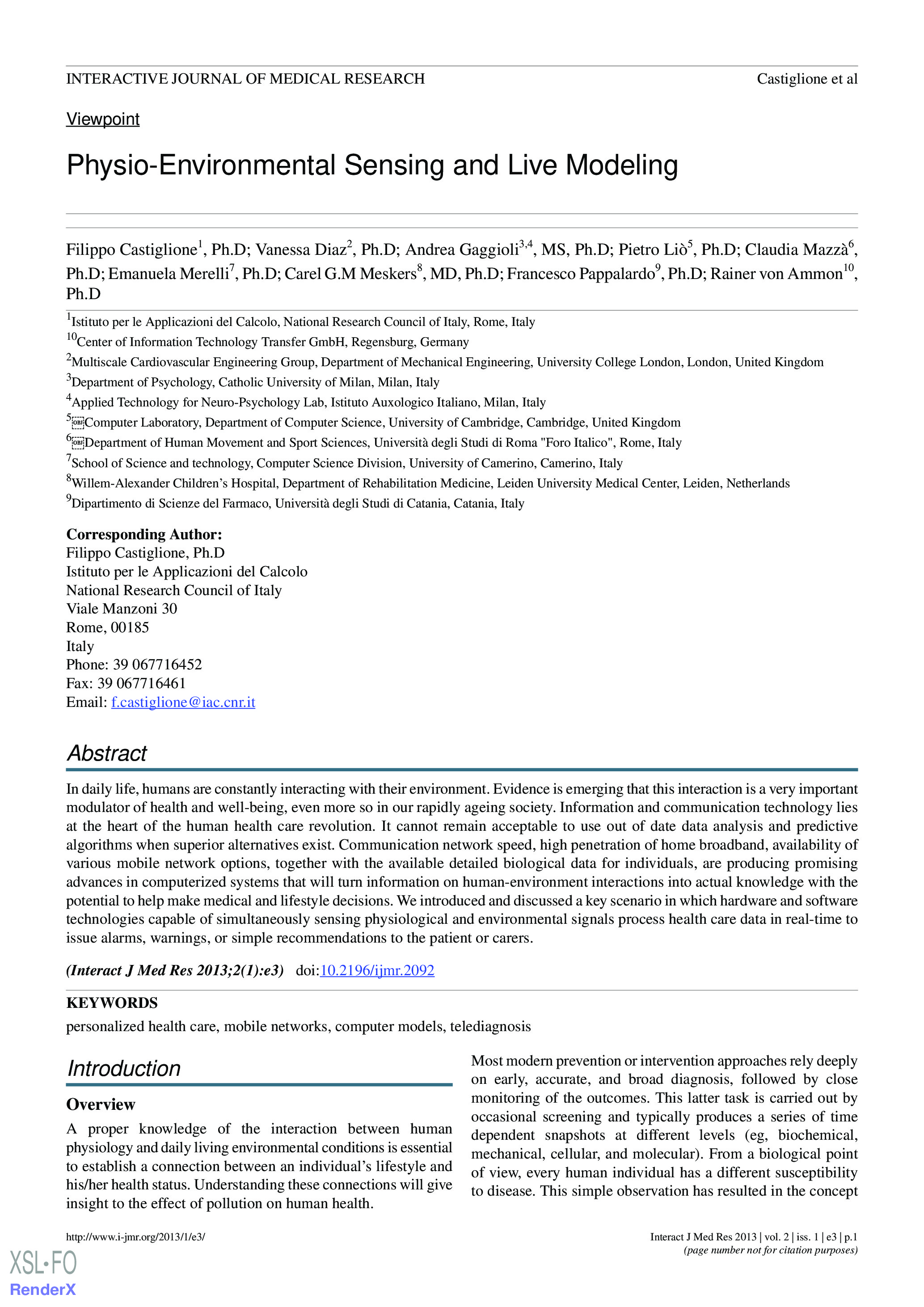 Rainer von Ammon
Date of upload:
29.10.2015
Co-author:
Filippo Castiglione, Vanessa Diaz, Andrea Gaggioli, Pietro Liò; Claudia Mazzà, Emanuela Merelli; Carel G.M Meskers; Francesco Pappalardo
Abstract:
In daily life, humans are constantly interacting with their environment. Evidence is emerging that this interaction is a very important modulator of health and well-being, even more so in our rapidly ageing society. Information and communication technology lies at the heart of the human health care revolution. It cannot remain acceptable to use out of date data analysis and predictive algorithms when superior alternatives exist. Communication network speed, high penetration of home broadband, availability of various mobile network options, together with the available detailed biological data for individuals, are producing promising advances in computerized systems that will turn information on human-environment interactions into actual knowledge with the potential to help make medical and lifestyle decisions. We introduced and discussed a key scenario in which hardware and software technologies capable of simultaneously sensing physiological and environmental signals process health care data in real-time to issue alarms, warnings, or simple recommendations to the patient or carers
View more 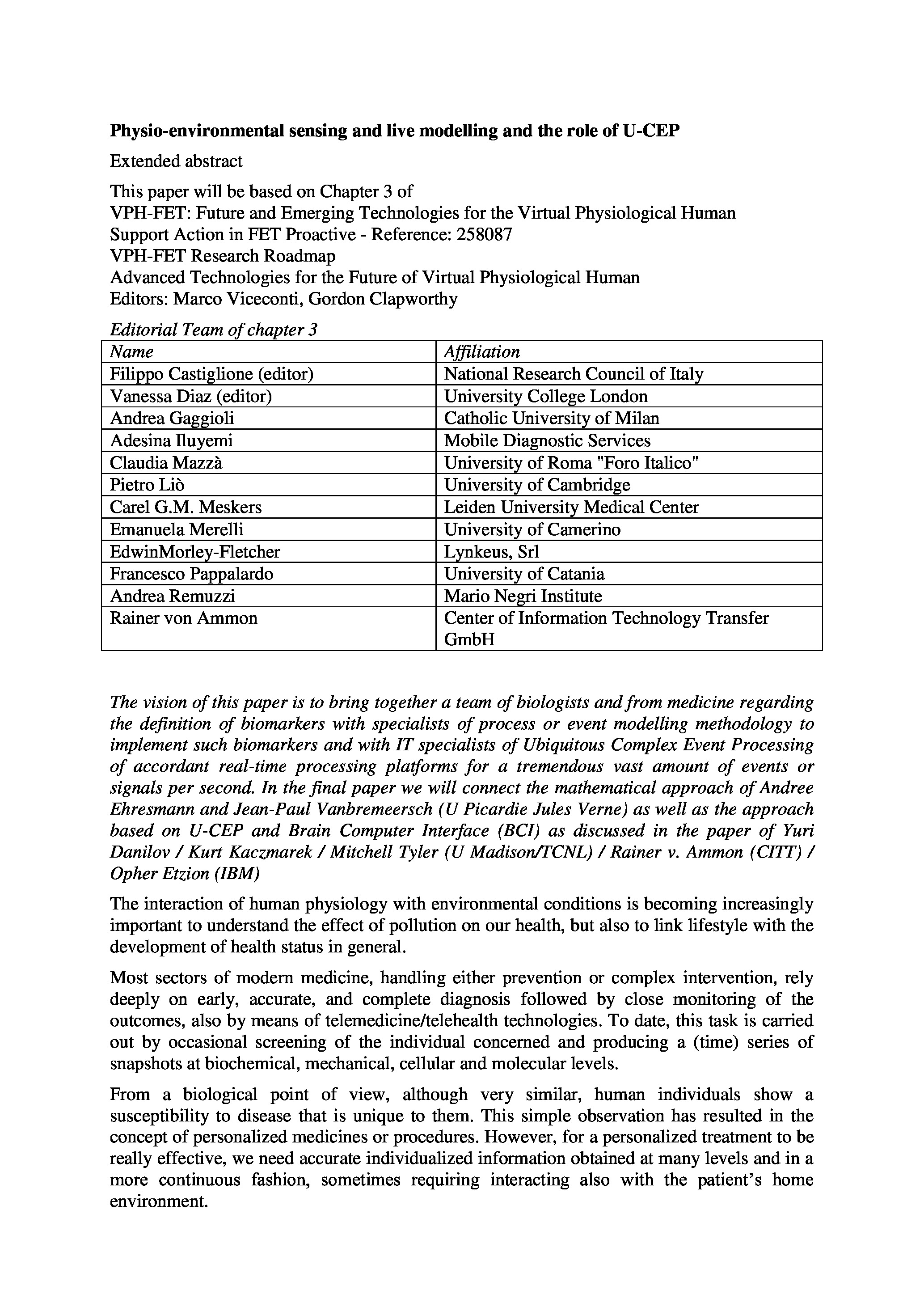 Rainer von Ammon
Date of upload:
29.10.2015
Co-author:
Abstract:
The vision of this paper is to bring together a team of biologists and from medicine regarding the definition of biomarkers with specialists of process or event modelling methodology to implement such biomarkers and with IT specialists of Ubiquitous Complex Event Processing of accordant real-time processing platforms for a tremendous vast amount of events or signals per second. In the final paper we will connect the mathematical approach of Andree Ehresmann and Jean-Paul Vanbremeersch (U Picardie Jules Verne) as well as the approach based on U-CEP and Brain Computer Interface (BCI) as discussed in the paper of Yuri Danilov / Kurt Kaczmarek / Mitchell Tyler (U Madison/TCNL) / Rainer v. Ammon (CITT) / Opher Etzion (IBM)
View more
Sort
View
Max
Min
End date
Youngest
Oldest
Alphabetical
A-Z
Z-A